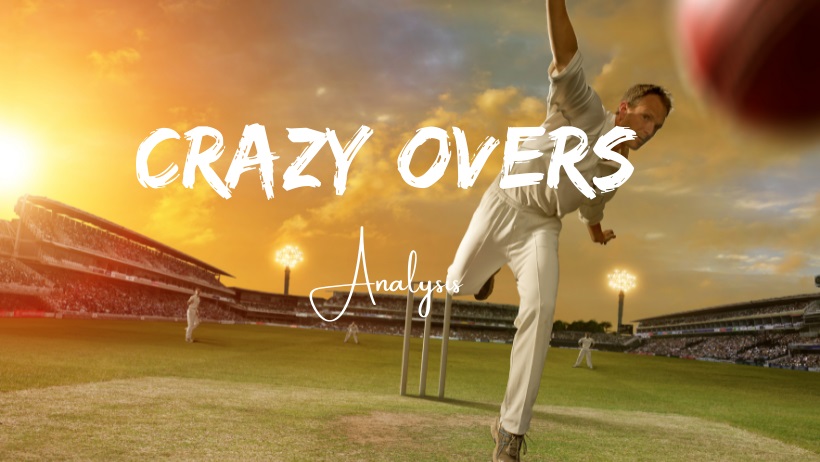 It’s the 14th match of IPL 2022 between MI and KKR at MCA, Pune. KKR are chasing 162. At 15 overs, they are at 127/5 with 35 runs needed off 30 balls. One would think that the odds favour the batting side and rightly so. KKR had Pat Cummins (22* off 8) and Venkatesh Iyer (50* off 41) at the crease and the rest were tail enders to follow. Of the 30 balls, 6 balls are to be bowled by Bumrah, so you would give the bowling side a fair bit of chance. But that one over which succeeded sealed the deal for the Knight Riders. What happened?

15.1 – Fuller ball and clobbered for six straight down the ground.

15.5 – Brilliant catch at Long off but it’s a waist-high no-ball. The match going worse for both MI and Sams. They don’t have any more plans to get rid of the Australian.

15.5 – And the free–hit goes for four. Rubbing salts on wounds you would say.

15.6 – And Cummins finishes off in style with 4 overs still left.

If there was a “Moments before disaster” reference to a cricket match, this over will surely be one of the moments.

Cummins hit 35 runs off the over to take KKR home with his brutal innings. His score at the end was 56*(15) at a strike rate of 373.33. In the process, he brought up the record for the joint-fastest fifty in the IPL.

While it was a memorable night for one Australian, it was a forgettable outing for his fellow countryman. Daniel Sams ended the match with figures of 3-0-50-1 with an economy of 16.7.

The match had no business finishing that early but Pat Cummins ensured that the audience go to sleep a bit early.

Records created and broken in that over:

From the players’ point of view, Pat Cummins became an overnight superstar. It was one spectacular inning played by a player whose primary skill is bowling. That’s one of the reasons for a lot of praise towards him. He has surely taken some confidence from some of his similar innings in the past in the IPL and on that day against MI, he went one notch higher.

On the other hand, his fellow national teammate was subjected to a lot of criticism, trolls and memes. When you go for 10 runs in your first 2 balls, the pressure is straight back on you and most often you tend to commit mistakes which weren’t intended to be. Such matches can be extremely cruel to a player and it might affect him psychologically.

These are the kind of matches, innings, and perhaps the over, which will be remembered for a long, long time. Let us look into a similar crazy over which happened in the IPL 2022.

LSG needed 34 off 12 at 17 RPO. The captain surprisingly gave the ball to Dube to bowl the 19th over. Badoni and Lewis combined and got 25 runs off the over with 2 sixes and 2 fours and brought down the equation to 9 off 6 and then won the match comfortably.

GT needed 48 off 18 at 16 RPO with Rashid and Miller as the last recognised batting pair. Surely, CSK isn’t losing this. But Rashid Khan had other plans. He smashed Jordan for 23 runs off 5 balls with 3 sixes and a four and at the end of 18 overs, GT needed 23 off 12 balls and they won with 1 ball to spare. That 18th over went for 25 runs.

KKR were going smooth in their run chase of 218 and at the end of 16 overs, they were 178/4 with 40 needed off 24 at 10 RPO. They had their skipper well set, Venkatesh Iyer on 6*(6) and then Sheldon Jackson to come next. But that Chahal over made KKR completely get into a strangle. Chahal prized out both the Iyers, Mavi and the also the danger man Cummins in his last over. He conceded just 2 runs in his final over. In that process, he took 5 wickets in the match (his first fifer in IPL) including a hat trick in his last over. KKR then lost by 7 runs.

In the second over of the match, Jansen destroyed the RCB top order and that pretty much sealed the game for the Sunrisers. He bowled Faf Du Plessis in his second ball with a sharp swinging delivery, then had Kohli caught at second slip for a golden duck and then took out Rawat in the last ball of the over. RCB got bowled out for 68 and SRH chased it comfortably in just 8 overs. The over: .WW.WDWD1W

Payback time for GT to SRH for their 20th over.

22 needed off the last over. It’s down to Rashid and Tewatia against Marco Jansen. Tewatia is on strike. The over: 616.66 And needless to say the winner. Rashid has won another game for his team with his batting. It is this over that made even the ever-calm Muttiah Muralitharan lose his cool.

There came a stunning one-handed grab off the ground by Evin Lewis in the 5th ball which changed the complexion of the whole match. Stoinis then knocked off the timber in the final ball and LSG snatched away the victory by a mere 2 runs.

RCB were 123-4 after 15 overs (8.2 RPO) and needed a strong finish to challenge LSG in a do or die game. Rahul brought on Bishnoi to get DK out as he struggles against leg-spin. But Patidar not only shielded DK but also took down the leg spinner. He smashed him 64646 and that over went for 27 runs, RCB finished very well after that and got to 207-4 (10.35 RPO) and won the match comfortably in the end.

The above instances reiterate the fact that When the going gets tough, the tough gets going. It is most often the situational demand that makes the players in both departments go berserk. And more often than not the matchups help a lot.

But some cases are highly unexpected like the Pat Cummins vs MI and Rashid Khan vs CSK ones that make us go in awe.

The Evin Lewis Vs Shivam Dube was purely a match up that worked in favour of the former.

We expect these kinds of crazy overs when there is a need for some big over to make up with the required run rate or when the run rate is so slow that you need to up it. Most of the crazy overs happen in the death overs as these are the overs where the batsmen look for a big finish and it may also work in favour of the bowler sometimes.